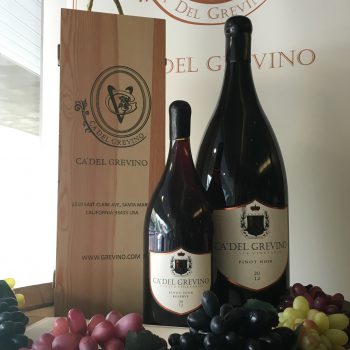 Located in the Santa Maria Valley AVA of Santa Barbara County – a place that used to be known for its supply of grapes to Napa producers – Ca’ Del Grevino has ambitious plans to achieve cult wine status for its prestigious crus, revealed at the wine estate’s debut in the Hong Kong and Mainland China markets.

Owner Randeep Singh Grewal, an American entrepreneur with business interests in oil and gas, and Chief Winemaker Gaetano David Addamo wish to make Grevino the next “cult wine”, selling only in the most premium premises and by allocation system only to end consumers.

“Only 6 miles off Pacific Coast, we believe our microclimate is the best for Pinot Noir in the world.” says Addamo, referring to his top wine, Ca’ Del Grevino Pinot Noir, which retails at HK$1,180 a bottle (about US$ 150 a bottle). “The key to its success is ‘gravity’, our Pinot never sees a pump. We also age different clones separately, taking only the best of the best into the final blend.”

A typical Californian entrepreneur, Addamo has not attended winemaking school or any type of formal training. “My college education was the first 3 years of the first restaurant I opened when I was 18 years old. I just learnt everything ‘by my hands’ and I always succeed in whatever I set my mind on.”

With that same spirit, he planted his first vineyard in 1999, hired a consultant and off they went. To the surprise of many, the very first wine he made – a barrel-fermented Chardonnay using 100% French oak, something unheard of in Santa Barbara then and strongly against the advice of the consultant – won a Double Gold Award in a local wine show and 91 points from Wine Enthusiast, an incredible achievement for a complete novice like him.

Grevino has since won the “Best Local Wine” award in both white and red categories in Santa Barbara several times. “I feel I’ve accomplished a lot and definitely have got the name out in California. Now the exciting part is to get recognised on the other side of the world.” Addamo added, “However we are not trying to expand and become a mass producer. Therefore, the goal is to keep the quality level high and set up a direct allocation system in China.”

Producing only 10,000 cases on average every year, John Cornforth, Director of Sales and Marketing, expects to have only 15-20% of the production allocated for Hong Kong and mainland China markets each.

Grevino is already listed on restaurant wine lists at the Peninsula Hotel and the Aberdeen Marina Club in Hong Kong. It is available in two ranges – the basic Grevino range retailing mostly at HK$499 a bottle (about US$ 64) and the top Ca’ Del Grevino range, comprising mostly Pinot Noir and Chardonnay, with small quantities of Syrah, Grenache, Dolcetto and Riesling.